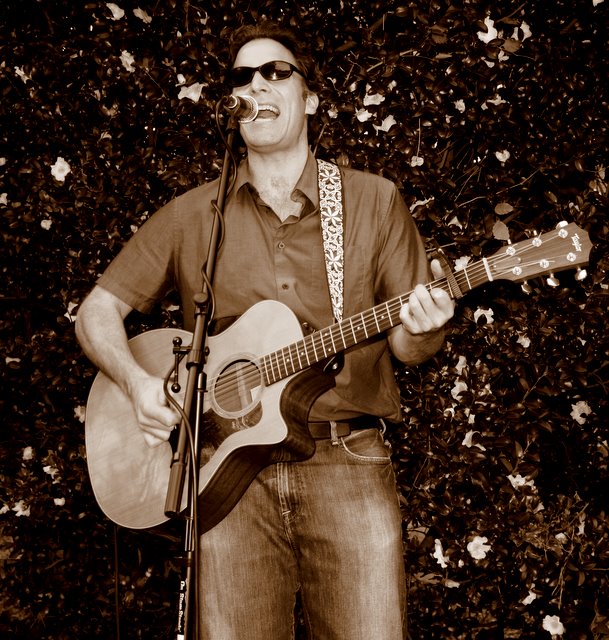 “Head For Home” is the second track on my second album, “The Hungry & The Hunted.” The riff in the chorus was one that I’d carried around for a long time. I remember living in Rome one summer during architecture school, and my roommate kept hearing me play the riff on this old nylon string acoustic guitar that lived at the apartment we rented. He asked what that song was. I told him it was just something I made up, and he said he liked it and that I should turn it into a song. I finally did, fifteen years later!

The opening line in the song is “we meet on the winter path.” The whole song grew from that line. One cold January afternoon I had taken a hike alongside Morgan Creek on a trail that runs around my neighborhood. I ran into my neighbor who was out walking her dogs. She’s this eclectic lady who had been an actress in L.A. She was always dressed in funky clothes with her long hair dyed dark red. We greeted each other, and I asked her how things were going. She instantly blurted out that her husband had left her for his mother’s hospice nurse. They were getting divorced, and she was moving back to L.A. I knew him pretty well and was stunned by her news and bluntness. I didn’t know what to say other than that I was sorry. We chatted briefly some more and soon said goodbye. I walked on down the trail and that “winter path” line popped into my brain.

I conceived the song with four verses, each one relating to one of the four seasons. The song is about the rise and fall of a love affair which begins with a tryst after a haphazard meeting. Of course, most times this kind of thing blossoms in the spring, but this one starts in the dead of winter along a “winter path” and culminates nine months later in the fall after a literal fall in a deadly drunken car wreck. The poor woman the narrator finds lonely in the woods turns out to be “a master in disguise” with ultimately fatal consequences for both lovers. Sort of morbid, I know, but as Stevie Nicks likes to say, “why write songs about happy things?”

Of the twelve songs on the album, my producer Chris Stamey was always the most excited about this one. He told me that after I demoed it for him while we recorded the base tracks of guitar and scratch vocal, he immediately started composing a string section in his head. It’s his arrangement that is on the album. I love it. Unfortunately, we can’t take the two violinists, and viola and cello players on the road. Karen Strittmatter Galvin (who plays first chair violin for the NC Symphony and played on my first album) has a few other things to attend to!

It’s interesting how this song has evolved as we’ve played it live. It has a little more swing now; maybe it’s more moody with a bit more bite. When I first showed it to the band, our lead guitar player Howard said it had a CSN “Wooden Ships” feel to it, and I think his lead after the second verse nicely evokes that connection. I heard James Taylor once say that he wished the order of recording a song was reversed. He noted that you go into the studio and record a song, and it’s now set in stone. He thought it probably would be better to play the song live for a period of time and then record it. He said you don’t really know the nuances of a song until you’ve performed it a number of times, but you’re stuck with the original version you came up with in the studio. Of course this is how the Grateful Dead did it; tour their songs for years BEFORE laying them down in the studio. I don’t know which way is the best. Recording in the studio does make you commit finally to the song BECAUSE you know it will be set forever. I rewrote the chorus to “Postcard To Okemah” while listening to it being mastered! Everyone thought I was crazy to stop and go back to redo it. But it was that ultimate pressure that made me carry the ball just a little bit further. I’m so glad I did; I would have always been bummed listening to it knowing I should have changed it. However, at some point you do have to commit to the record (and move on with your life). So I appreciate that songs can and will grow live. Nothing wrong with having a few alternative versions out there spinning around the universe.