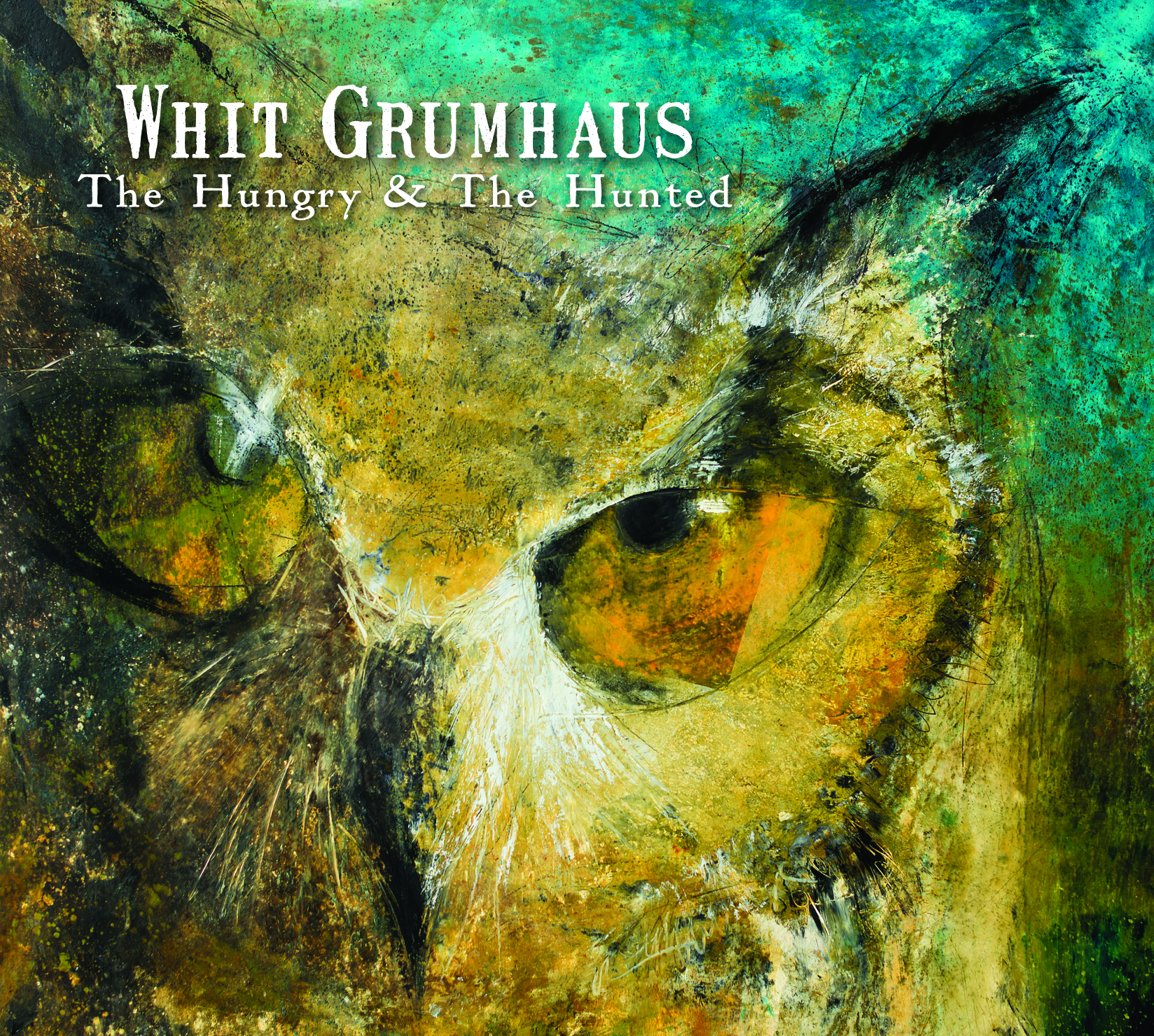 My wife was Googling works by Asheville painters, and came across this painting of an owl by Mark Bettis (http://www.markbettisart.com) .  She handed me her iPad to look at the painting.  The first thing I said was “this looks like an album cover”, and I gave her back her iPad.  Several nights later I was out on our back deck looking straight up at the full moon through winter trees.  I heard an owl up in the pasture and imitated his call.  The owl responded so I did it again.  He replied more loudly, now nearer by.  I called once more and I heard him again.  Somehow, silently, he was directly overhead.  I turned off the outside lights.  I looked up and tried to make him out.  Then, magically, I watched him unfurl his wings and take flight.  He was a perfect shadow against the cotton cloud, back-lit by the super moon.  He was a giant.  Suddenly, a second owl, even larger than the first, ascended and darkened the sky.  Their wings had made no sound; such stealthy hunters.  I realized right then I had both the album cover and title of my second album.

I contacted Mark immediately and asked if he’d be willing to let me use his painting as my cover.  Graciously, he accepted the idea, and a couple weeks later I found myself up in Asheville at his awesome studio at the Wedge building looking at the actual painting.  It’s titled “In Site”.  The “x” over the owl’s eye is meant to imply the moment when the owl has locked in on his prey and is about to swoop down on the helpless victim.   Mark had painted it as part of a series he titled “Spirit Animals” which included another owl, a wolf, a bear, a fox, and ravens.  This animal painting was the only one left from the series only because he’d taken it home.  He said he rarely hung his own art at his house, but this piece was special to him.  We made our deal over the use of the painting as the cover.  I kept looking at it, looking at it, looking at, and I couldn’t leave it behind!  So here it proudly hangs in my living room.  Thank you Mark! 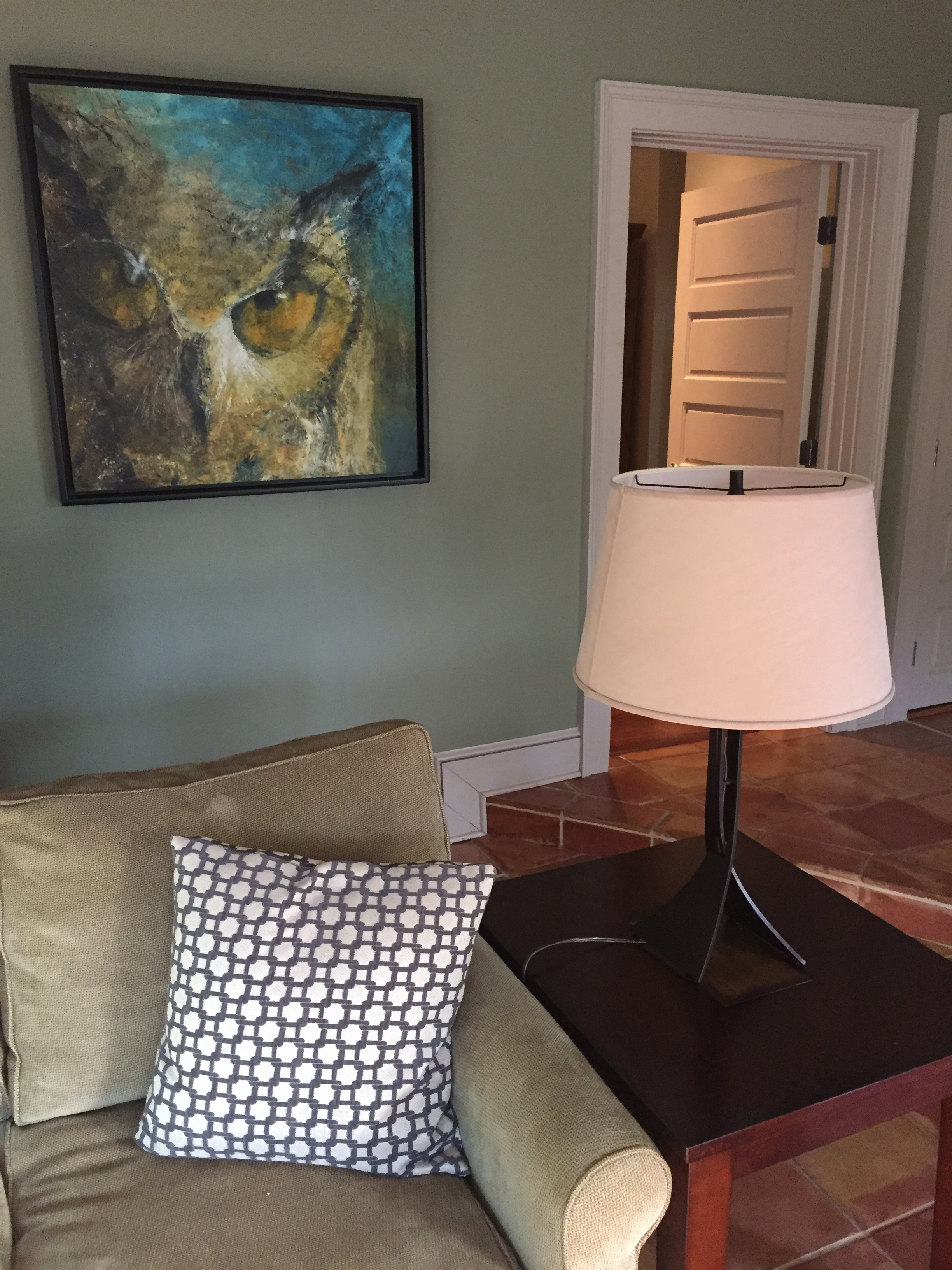 I’ve named the album “The Hungry & The Hunted”.  This comes from a loaded Springsteen lyric on his epic song “Jungleland” off his legendary “Born To Run” album.  It just fit with the painting so well and it’s also a good way of summarizing the various narrators in the songs on the album.  It basically all comes down to two groups: there are the ever-hungry hunters and the terrified “huntees”.   Suffice it to say there aren’t many noble characters coming out of the songs on this record.  Perhaps one: the patient boyfriend in “Take Me With You When You Go”.  Other than him, though, it’s mostly a “basket of deplorables” who fit into one side or the other of the food chain equation.   I’ll let you listen and be the judge of who fits where.  I also want to give a shout out here to graphic designer Chris Eselgroth for realizing my cover vision and making it work. Just what I had in mind. 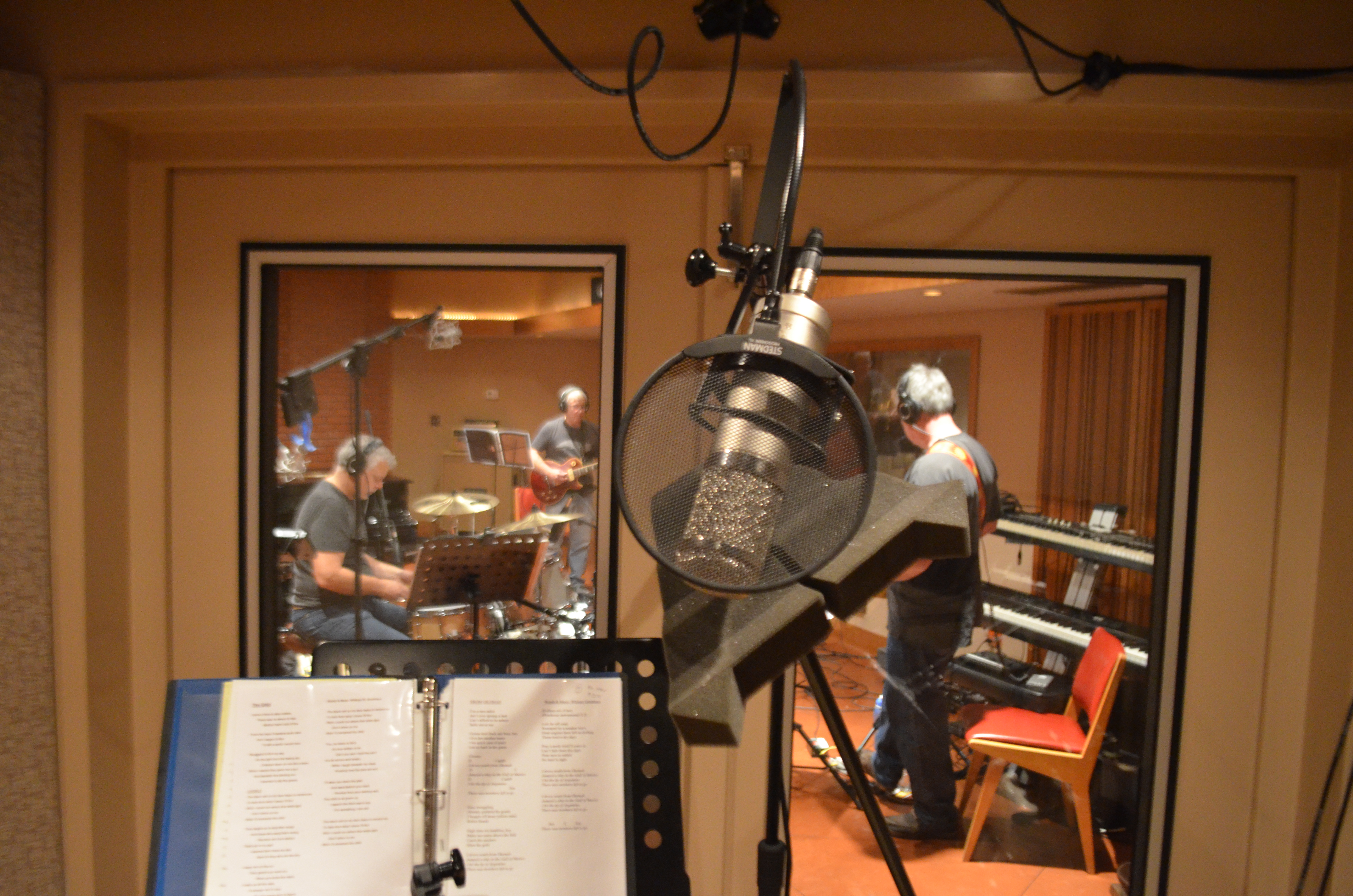 Neil Young says that the only way to make a record is to get the band in a room and record it live with no overdubs.  I said this to my producer Chris Stamey once and he quickly replied that Young has an advantage in that all the guys in the room are world-class musicians.  How true.  My first record, “Been Here Before” was recorded at Chris’ studio, Modern Recording, in May of 2011.  It’s a collection of my songs that I’d been toting around for many years. My earliest song “Icarus” was written in high school and performed at our school talent show.  The song “The Other Side of Rainbows” was written on the bed in my dorm room freshman year at college. I didn’t know what to expect after I first laid down the rhythm guitar and vocals for that album.  I’d never heard them backed by a full band, but thanks to a host of excellent local Triangle musicians and the miracle that is Pro Tools recording software, their instruments and voices were added to my base tracks to flesh out the album which was finished that December.  I was beyond thrilled with the result.

Flash forward to 2015.  Young’s words beckoned. I couldn’t give up on the notion that tracking the album live with a full band was the approach I should take for my second one.  There was a small problem: I didn’t have a band…  Though for months I had been jamming with two buddies most Tuesday nights at my house in a log cabin on my property that had been converted to a pottery studio by the previous owner and dubbed “The Roost”.  Frank plays bass and Howard plays lead guitar.  It became clear that these were my guys.  We didn’t have a drummer, but the mighty Tony Stiglitz, an old friend who played exquisitely on my first album, agreed to help me again.  After a few rehearsals with drums, we went for it.  The album was produced by Chris Stamey and we recorded it over a weekend last December at Deep River Sound Studio in Sanford NC.  The recording studio was built in 2014 for John Davenport.  John is fabulous and has been in the music industry for years including a long stint at the Hit Factory in NYC working with the likes of Bruce Springsteen, the Stones, and John Lennon.  Read all about him and his Wrightian studio in his Mix Magazine cover story profile http://www.mixonline.com/news/facilities/deep-river-sound-studios/426218.  My day job is as a licensed architect, and for John’s studio, I was the project architect.  The studio was conceived nearly 20  years ago by my boss and colleague Wes Lachot and it was finally brought to life opening earlier last year. I’ve been working for the Wes Lachot Design Group since 2012 and our studios have been built across the globe including current projects in Dubai, Iceland, New Zealand, Mongolia, as well all over the US.  Having drawn every single brick on the triangular building that became Deep River, I very much wanted to record an album there.

This amazing studio made all the difference.  Having helped design dozens of recording studios for our happy clients, I drink the Kool-Aid every day at work.  I’m sold on the implicit fact that analog recording is greater than digital recording.  It’s a simple matter of the physics of electrons.  Microscopic digital converters can’t replace the “real” movement of electricity through an analog mixing console. You can feel the depth of an analog bass sound wave.  The sound is fuller with far more headroom.  It’s the reason why temperamental vinyl records now outsell digital downloads.  I can feel all you “in the box” engineers scrolling down for the comments section right now, so I’ll leave this topic here.  Suffice it to say, I simply had to record at Deep River.

That weekend spent recording the tracks was just beautiful.  The studio is perched above the banks of the Deep River on a 500 acre farm replete with horses, donkeys, and lamas!  We had a great time.  We set up all the equipment Friday afternoon and returned Saturday morning to begin.  With Chris Stamey at the helm of John’s awesome API Legacy Plus console and “my band” in place, we were ready to roll.  By late Sunday night, we had finished tracking all twelve songs that would eventually became my new album “The Hungry & The Hunted”.  Much of the credit for this goes to the work Frank, Howard, and I had previously done in the Roost and of course to my producer Chris.  He and I had spent hours ironing out the rough edges of the songs during pre-production at his studio including committing to each songs beats per minute which really streamlined the process.  He is a great producer and an amazing musician in his own right. His experience and ear were instrumental in getting the album cut so quickly. He’d jump up from the control room and rush into the tracking room after a take and say “try this” or “do that after this part” and then we’d go ahead and do it.  He knew exactly what we needed to get from each take and most importantly, he knew when each track was complete so we could move on.  He was like a brilliant head basketball coach getting us to execute on each possession.  We had a blast.

Well, there was a lot of overdubbing to come in the next few months.  Sorry Mr. Young!  We gave it our best shot.  He is right though.  Listening to the finished album, I can feel the vibe of playing with those guys. I can close my eyes and see them at their instruments.  I feel our energy percolating beneath the words and the beat.  That’s really all I wanted; to play in the band.  All our moments were captured.