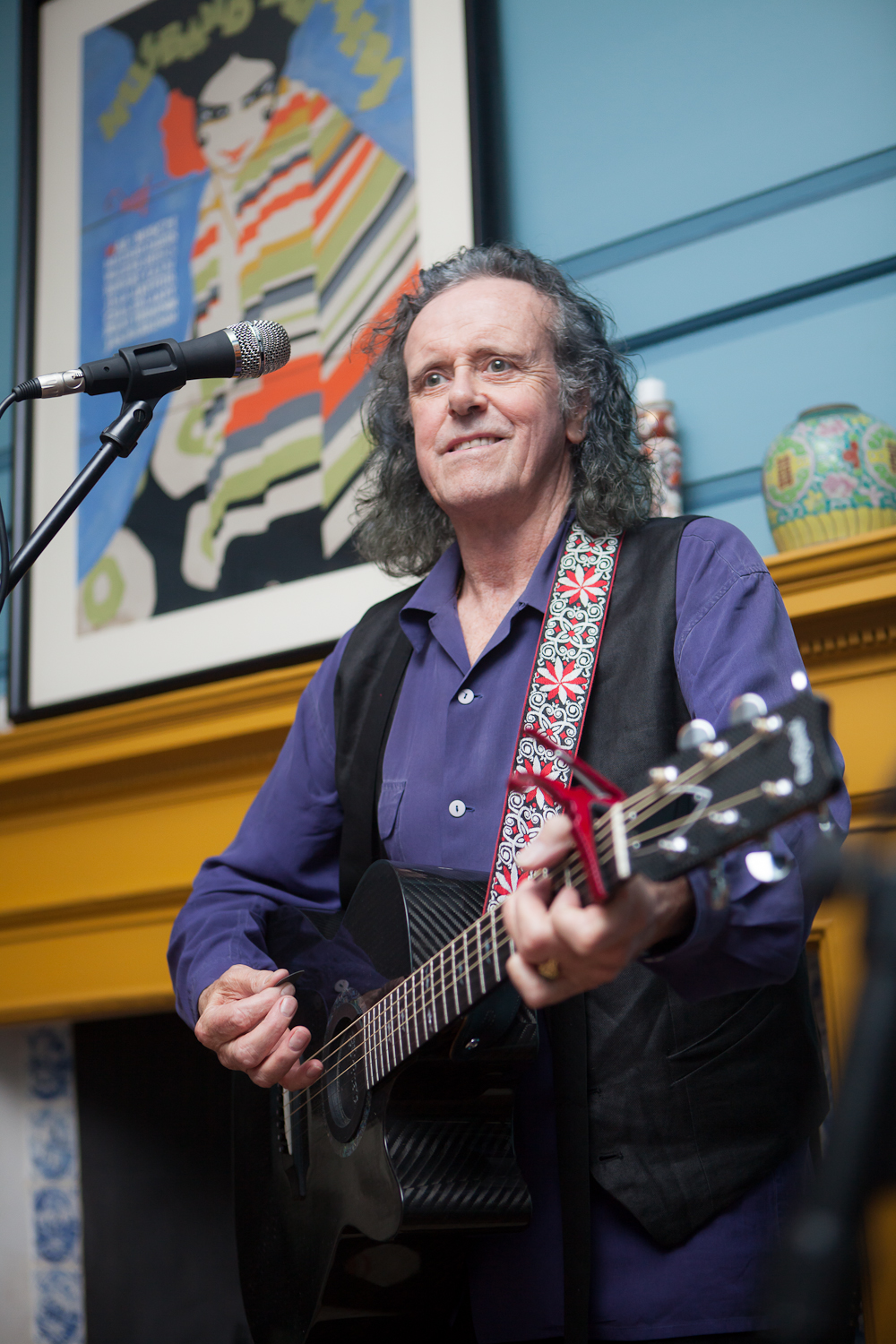 It’s a curious moment, sharing the stage with a living legend—a member of the Rock ‘n Roll Hall of Fame.  So it was through pure luck and happenstance that I got to perform a couple songs with Donovan a few months back. Donovan had come to Charleston SC to join his old friend Chris Murray on the dais at the Gibbes Museum of Art.  Chris had curated an exhibit of large format portraits of iconic rock star that was opening there. One of the shots was of Donovan in full late psychedelic 60’s regalia brandishing a cane.  For years Chris owned a gallery in Georgetown that specialized in rock ‘n roll photography, so he was the perfect person to put the exhibit together.  For the opening, Chris gave a lecture detailing the images and would ask Donovan to share anecdotes about his colleagues and what it was like being part of the British Invasion.  Donovan was funny and light.  At the end of the talk, Donovan pulled out is tri-colored acoustic guitar and performed four tunes including his major hits “Sunshine Superman” and “Mellow Yellow.”  Needless to say, he brought the house down.

I had known Donovan was a big deal. Coincidentally, I’d just recently watched D.A. Pennbaker’s “cinema verite” documentary “Don’t Look Back” that captured Dylan’s 1963 tour of Britain.  Donovan had just broken on the scene and his name was all over the newspapers.  Dylan refers to Donovan several times in the film, and you quickly get the sense that Dylan feels a bit competitive with Donovan. When his friend jokes Dylan that Donovan is a better guitar player than him Dylan quips “right away I hate him.” Later on the tour the two actually meet and there’s a scene that captures Donovan singing and playing guitar to a roomful of people in Dylan’s hotel room and Dylan genuinely tells him he likes the song.  But despite all the footage of Dylan’s adoring fans, the crowds bum-rushing his getaway car after shows, and all the media and press headlines, Dylan’s recurring commentary about Donovan reveals he regards him as a rival. I think this is what makes all the greats like Dylan rise above their peers; they always carry a bit of a chip on their shoulder that they are better.

So I had all this in mind while my band COFFEE was performing during the reception that followed the exhibit opening.  During the second set, Donovan came into the room and listened to a couple of our tunes.  My heart was racing as he watched us.  He came up to the stage and started thumping a pair of congas that sat unattended.  We happened to have an extra guitar (hmmn, how did that get there?) and he asked if it was plugged in. I immediately handed him my carbon RainSong guitar and scrambled to get the Stratocaster in tune and amplified and we quickly jumped into the Stones “You Can’t Always Get What You Want” and then went to Dylan’s “All Along The Watchtower.”  My bandmate Carl Mabry and I joined Donovan in singing the choruses.  The assembled crowd gave us a thunderous applause.  When I broke into and summarily fumbled the opening chords to the Beatles “Norwegian Wood” Donovan told me he didn’t know that one—you couldn’t tell what song I was trying to play!  He quickly unstrapped my guitar he was playing, handed it back to me, then wandered off to rejoin the party.  Needless to say, I haven’t faltered on “Norwegian Wood” ever since. Lesson learned!

My brush with greatness hadn’t lasted very long, but it was a true honor that I won’t soon forget.  It will be hard topping that experience. 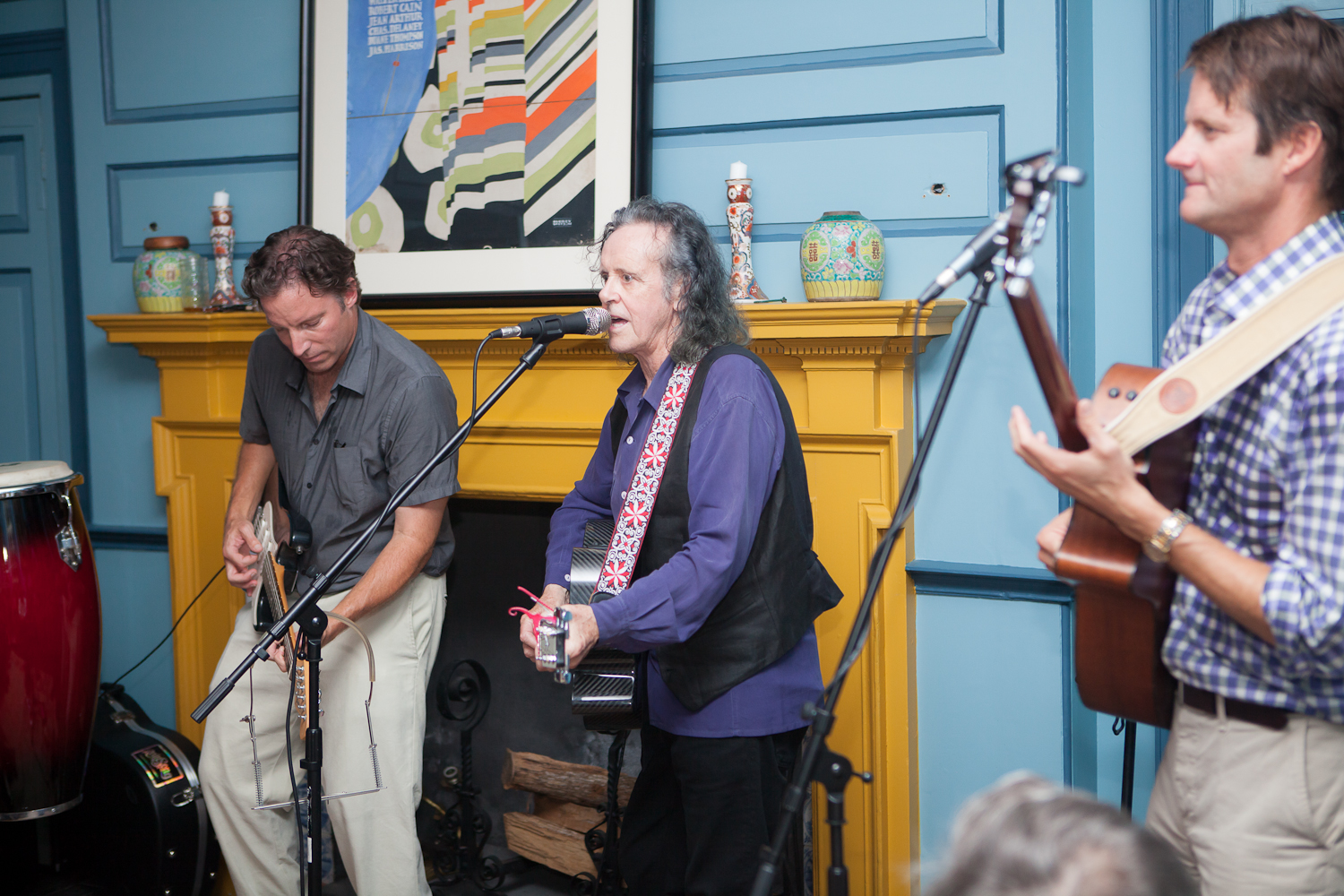